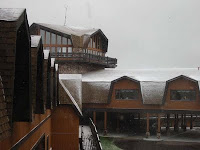 I just came back from a three-day retreat in Watersmeet, Michigan. What a beautiful setting! It is in the upper pennisula of the state about 45 minutes from Lake Superior. The trees were all shades of orange, red, and yellow and a little bit of snow fell on the rooftop of the retreat center on Saturday morning. (The flies are a whole other story!) There is nothing more peaceful than being in the country with quilters! 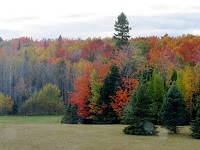 I am always amazed at how strong friendships are among quilters and how well they all get along. If you have ever worked in an office, you know that anytime you get a group of women together, they become caddie and have trouble getting along. It was like that when I was a little girl. I could have one friend over, but if there were three girls, one always seemed to feel left out (and it was usually me). I have never felt this way or noticed this among quilters. 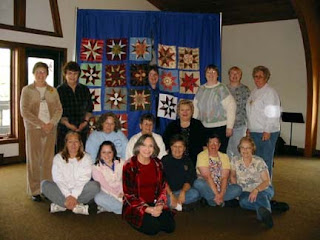 I have always been welcome with open arms whenever I teach or lecture at a guild meeting. I never feel out of place because I am with people that love quilting as much as I do. There is nothing better than teaching a group of people that are truly interested in what you have to say. It is nothing like being in the general education setting (or special education setting for me) where you have students that would rather be anywhere but school.

What is so wonderful about quilters, is how giving and encouraging they are with each other. One of the quilters in the group had heath issues and one of her friends was cutting the pieces for her block while another one was helping her piece it when she wasn't feeling well and had to go lie down. The friend did not want her to feel too far behind the other quilters in the group so she finished a block for her. There was also a fourteen year old girl who was making her first quilt. She wasn't new to sewing, she had made many purses and other things, but had not made her first quilt yet. The workshop that I was teaching was my St. Louis Star block and it was not an easy first block. Everyone was so encouraging of her efforts and each one of her blocks was better than the one before. She felt so good about herself by the end of the weekend as did other quilters who had struggled at first with their first  block because of the comments and praise from all of the quilters at the retreat. I don't know of any other group that is so willing to help each other. Of course, there was some competition among the quilters to see which one could finish the most blocks, but  it was usually done with humor. (A little competition is healthy!) 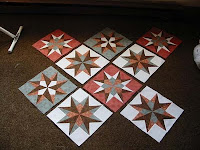 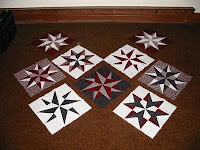 I have also found this willingness to help true with national quilt teachers. I have had lots of help along the way from well known teachers like Marti Michell, Sharyn Craig, and Libbie Lehman. They were all so encouraging of my journey to becoming a national teacher and always took time to answer any questions I had or calm my nerves at my first large teaching engagement (Houston quilt festival).


I love doing retreats because I get to spend more time with the quilters and see what they do with the skills that I teach them. This was a particulary good workshop in that many of the quilters felt comfortable enough to take off on their own to create something other than the pattern they were given. It makes me feel good  that I was able to encourage self-creativity after teaching the general instructions about the block. It also gives me a chance to get to know the quilters better. I always come away from a retreat (or any workshop) with new friends! 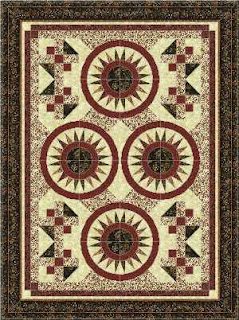 Now to quilt news. One of my newest designs has been published in Fons & Porter's Love of Quilting. It is called Isabella and was created with Timeless Treasures Isabelle collection.

I have the fabrics on my website for sale. You can see it here: ttp://www.shopfonsandporter.com/productdetail/ISABELLE.htm.

My next blog will show you how to foundation piece using freezer paper and sewing off the foundation so that you do not have to tear off paper.

Everyday do what you love and love what you do. Toby