Just a quick note. My Craftsy class is live! For a limited time (until Friday August 4) you can get 50% off the original price of $39.99.
(50% off the full retail price of select Craftsy classes taught by Toby Lischko. Cannot be combined with any other coupons.) Use this link to sign up. Clever Curves: Piecing Techniques. 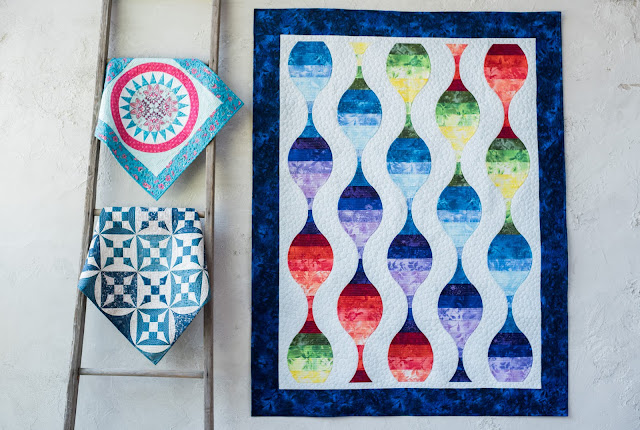 You get these 3 patterns and lots of wonderful tips!

I received this testimonial from a student after signing up for the class.

"I've paper pieced for many years. I have tried this technique before but the teacher made it seem so complicated that I went back to regular paper piecing ...with that said, you are making it so easy to understand with your demo that yes I will try it again and think I already have this template set!! Also your camera man is getting great shots showing what you are doing!!"

I hope you consider taking my class. I promise that after taking it you will never be afraid to do curves again!

Sometimes life just takes a leap! This year I started that state block challenge hoping to keep up with the weekly blocks. I am so sorry for those who were following it that I have dropped the ball. I do plan to start that up again after the first of the new year.

Now you are probably asking why am I waiting that long to start it up again. Well, a lot has happened in the last 3 months! In March I found out that Craftsy had accepted my proposal for an online class so the next 3 months were consumed with phone conferences, writing patterns, making samples (sometimes two of the same quilt), writing script, and rehearsals! I filmed the class in June. 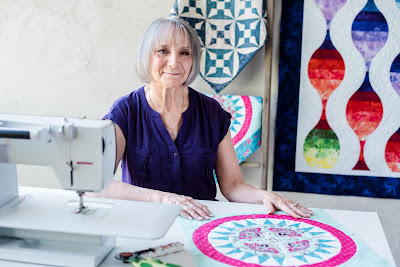 The class is called "Clever Curves: Piecing Techniques". It goes on line tomorrow! It features 3 very different quilt designs starting with a very simple hourglass block that I designed. I demonstrate how to get that perfect 1/4" seam allowance, a no nonsense way to make your own templates, how to use those templates, and my special pinning method for no pleat curves. 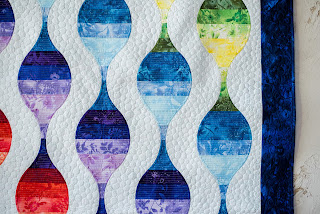 The second quilt, my pattern Glorified Nine-patch with a Twist, continues with the theme of using templates and sewing curves. I demonstrate how to make a fast nine patch with seams guaranteed to match, more curve piecing and how to make setting blocks and corner blocks to turn the quilt into an on-point setting. Along with that I show you my special binding technique where the binding matches the outside blocks. This technique won me a first place ribbon in a local quilt show. 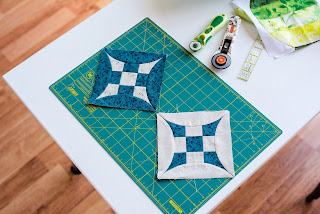 The third and final quilt is the one that I made for my "Unfoundation 101" piecing class. I called the pattern Crowned Jewel. The fabrics in this block are to die for! In this class I show my no tearing (taking paper off, but it is a method you won't cry about either) paper method using freezer paper, how to sew tighter curves and how to fussy-cut the center to really make the block pop! 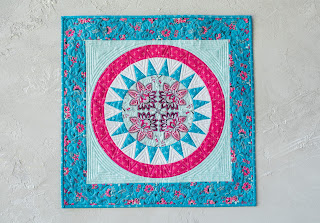 I promise you after taking this class you will never be afraid of curves anymore.
This class goes on line tomorrow. I am very excited about it! I will be sending out a code for a special discount and talking about some give-a-ways tomorrow after it is "live". All of the fabrics in these quilts are available on Craftsy's website.

But that is not all I have been doing. I was also asked by Craftsy to design some exclusive designs that they will kit. I have to make 2 large quilts in 6 weeks! I can't reveal those yet, but they will be on their website in November. The fabrics are very home deco.

While this is all going on I have also been traveling and teaching. In May, I lectured and taught at a quilt guild in Marshall, MO. What a wonderful group of quilters! Then I went to Columbia, MO and lectured in June. At the end of June I flew to Denver and filmed the Craftsy class. In July I traveled to Kansas City, MO and lectured.

Also in June I decided to update my website so I have a new and shiny website (still the same url) Gateway Quilts & Stuff. For my new website I am having a special launch starting today. All purchases will receive a 10% off  and that includes my already reduced prices on my fabrics. I just got two wonderful fabrics from Quilting Treasures called Imperial Paisley. It is a symmetrical print perfect for my fussy-cutting classes! You can find them here: Navy version and white version. I can't wait to start playing with them! 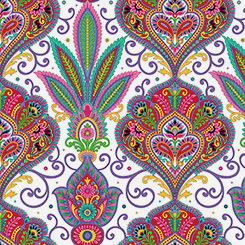 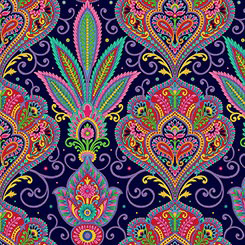 The first 10 orders over $25 will receive my special seam guide free and all orders over $100 will get free shipping.

One new wonderful thing about my new website is that I now offer PDF downloadable patterns. I no longer have to take orders, email the patterns and refund the shipping. Whoopee!!!! This is my newest pattern; Moon Over New York. I also have lots of free web patterns that I have been designing over the last 15 or so years that are no longer on the fabric company's websites. I hope you get a chance to look at my new site and please feel free to send comments on what you think about it. I have a new feature that you can search for anything on it by using color, manufacture, design, theme, etc. 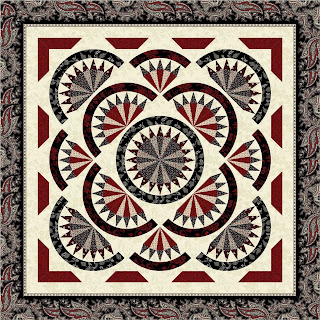 Well, I have to finish packing for a guild lecture and workshop in Fort Wayne, IN tomorrow so I'd better close this out. I think I've packed today's blog with lots of new and fun information. Stay tuned for more information on how to sign up for my Craftsy class.

As always: Do what you love and love what you do. Thanks for reading and feel free to share with all your quilting friends. Toby Lischko.

RJR What Shade am I