STATE BLOCK CHALLENGE/FLORIDA BLOCKS 9A AND B

I'm baaaaack! I apologize for the long delay in posting the next state blocks. If you saw my last post (in December) I showed you a photo of my newest family members. Two Belgian Malinois puppies. Well after that post, my husband and I were getting very little sleep! If you know anything about that breed, they are very high maintenance. Super intelligent and super hyper. They weren't difficult to train, but trying to keep up with all of that energy was exhausting. Even though some people thought we were crazy to get two of them, we found that to be a blessing, because they entertain each other to get rid of some of that energy. If we had gotten only one puppy we can't imagine how much crazier our lives would have been. Here is the most recent photo of them. They are now 6 months old. 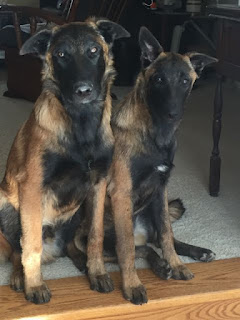 We got them at 8 weeks. The largest one (Burke) back then weighed 11 pounds. He now weighs over 50! Hare was 9 pounds and he now weighs about 45. They still act like puppies, but they certainly don't look like puppies! We are enjoying them so much. Even though we still miss Lucy (our other Malinois) they do fill a big void that losing her left.

Now to get back to business. I had taken a break after that last block, because of the holiday and after the first of the year I fell into a quilting funk. I really had no interest in doing any quilting at all. I kept telling myself that I needed to get back to these blocks but I started watching the "Outlander" series with my new DVR with Direct TV and I couldn't stop. So I watched 26 shows in about 3 weeks!

I'm not a big TV addict, but because now that I could tape whole series of programs I had never had a chance to watch, I started watching TV more. It almost became an addiction. It was just like when I start playing a new game on my iPhone or iPad, I can't put it down. It's a good thing that I'm not addicted to gambling or something that costs a lot of money. (I'm not including collecting fabric!)

It was really hard to find 2 Florida blocks that were doable. Block A has 69 pieces but they are all triangles and squares. Block B is a little more complicated but still not a hard block to make. 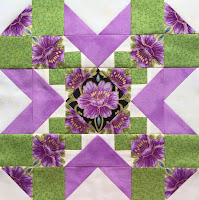 I chose both light and dark focus fabrics, a light background, and a medium purple and medium green coordinating prints. 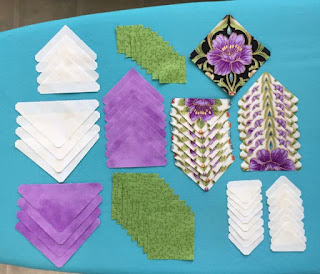 Here is what you need to cut. Instead of making my own templates, I chose to use  Marti Michell Template set B and my Cutting Corners template set to cut out most of the pieces. Her template sets are available for purchase on my website. Sets A and B should cover most of the blocks that I have made and will be making because they are 3" and 4" sets which go with any 12" block. Some of the more odd shapes I still have to make my own.

1. Make four half square triangle squares with the Fabric 1 template A sets. I have two different repeats. It is really hard to see the seams but they are there. Press to one side. 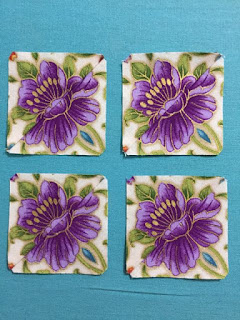 2. Make four half square triangle squares with the four of the matching sets of Fabric 1 template A and four of Fabric 3 Template A. Press to the Fabric 1. 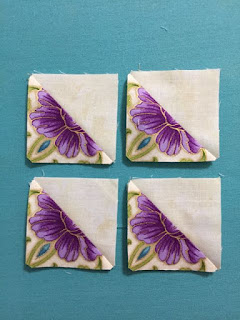 3. Center square. Sew a matching set of the remaining four Fabric 1 Template A sets to a Fabric 2 Template F. Press to A. 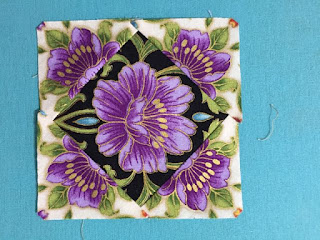 4. Make four Flying Geese with the four Fabric 3 Template C and eight Fabric 4 Template A. Press to A. 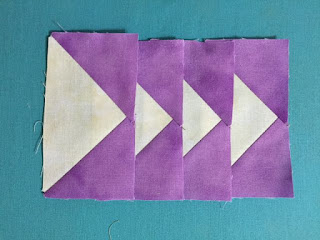 5. Sew a Fabric 5 Template D square to each side of a Fabric 3 Template E. Press to E. Make eight. 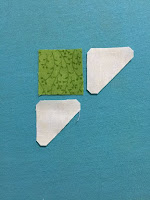 6. Sew a unit from step 5 to each side of a Fabric 4 Template A. Make four. Press to Template A. 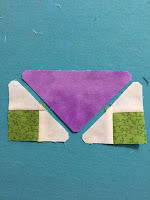 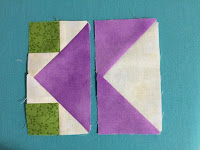 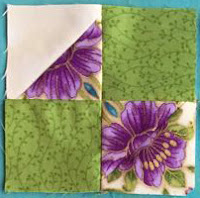 9.  Layout the sections as illustrated. Sew sections together across then sew rows together. Press to the side of the least number of seams. 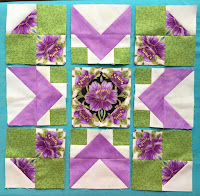 When I started Block 9B I had picked out different fabrics and a different center for it. I wasn't happy with the color selection or the way the center looked so I changed it. Here is what it looked like before I changed it. It really changes the whole look of the block. What do you think? 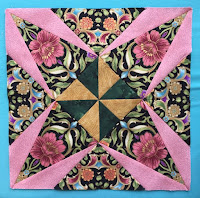 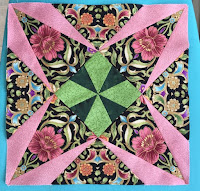 For this block I chose just the dark focus fabric, a medium pink, medium green and dark green.

Here is what you need to cut. If you kept the templates from previous blocks you will not have to make another Template D. Check through your templates and lay them on the paper images to find the right one.

1. Sew a left and right Template A/C to a Template D. Press to A/C. Make four. 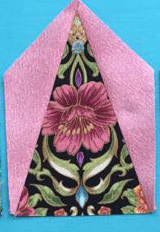 3. Sew the Fabric 1 pieced B triangles to the step 1 unit. Press to Template B. 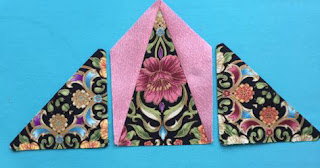 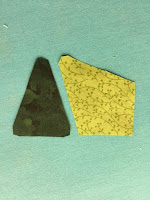 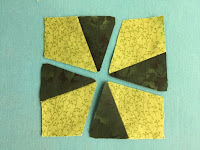 6. Sew the center section to each large end of the remaining two units from step 1. Press to center.

7. Sew the two units from step 3 to the sides of the step 6 section. Press seams out. (If the image looks funny, I started with a different center so I had to replace it but didn't take the whole thing apart.) 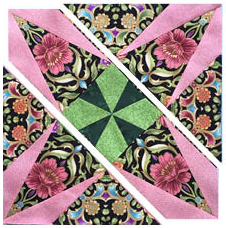 Here are the links to the templates. Remember to save them to your folder first then open them with Acrobat Reader. Let me know if you have any problems opening them.

Please feel free to leave a comment at the end. I would love to hear from some of you even if you do not participate. It is never too late to join in. You don't have to start with block 1. You can choose to make as many or few as you want. Also send me the images of the blocks when you get them done. Send them to my email at tlischko@yahoo.com. Be sure to take the photos as a "flat" shot. Tape it to a wall to get it straight on.