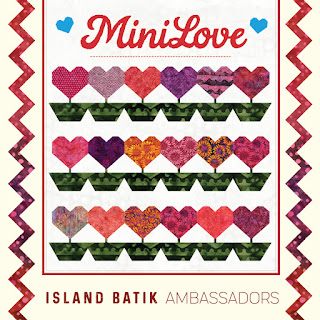 This post may contain affiliate links. The products in this blog were given to me by Island Batik.

FIRST I WANT TO ANNOUNCE THE WINNER OF MY GALENTINE'S DRAWING. ALL I KNOW IS HER ACCOUNT NAME; JRQUILTS. SHE DID NOT LEAVE AN EMAIL TO REACH HER. PLEASE CONTACT ME WITH YOUR U.S. ADDRESS. IF I DO NOT HEAR FROM HER, I WILL DRAW ANOTHER NAME.

The second project this month as an Island Batik Ambassador is a challenge to create a mini quilt called "Mini Love".

I started making minis in 1997 when I became frustrated because I couldn't always finish my larger quilts and they took too long (and were difficult) to quilt on my domestic sewing machine.

When I started working in a quilt shop part time in 1995, I discovered "Miniature Quilts" magazine (which is no longer in print). I saw that they had a yearly contest called "Quilts from the Heart". I had created a miniature quilt from a large quilt that I had designed for my son's band moms' group, to raffle at the craft fair at his high school. I submitted that quilt to the contest. The band had had a dinner silent raffle and that quilt was in the raffle with the understanding that if it was accepted to the contest I would have to send it to the magazine. Well, not only was it accepted, it ended up on the cover of the magazine! (It is the red, white and blue quilt on the left bottom.) I wish I could say that I still have that quilt but the woman who won it at the dinner raffle wouldn't sell it back to me! 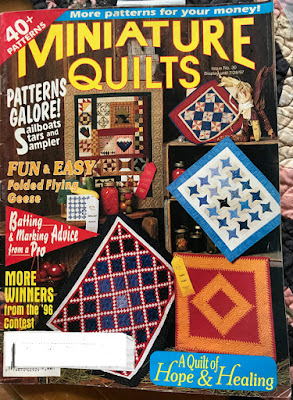 Having the quilt on the cover of the magazine spurred me on to making more minis and submitting them to the magazine's contest. I got more published and even won some prizes for my quilts. All of these quilts are under 24". Most have blocks that are 4" or smaller. This quilt is called Blueberry Pie. 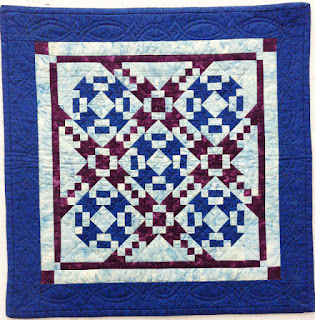 This pineapple quilt I used my own hand dyed fabrics. I called this quilt Pineapple Sherbet. 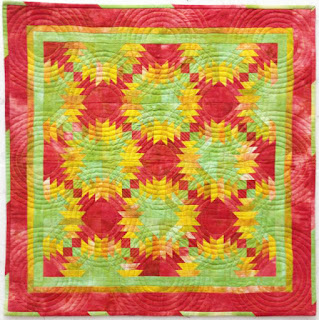 This quilt won an innovative quilting prize. I couched a heavy thread using a zig zag stitch with a variegated thread. It's name is Pennsylvania Star Explosion. 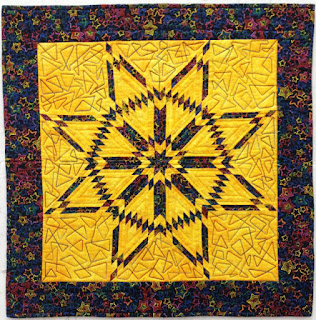 This won a machine quilting award and ended up being on the cover of my St. Louis Stars book. It is called Stars Over St. Louis. 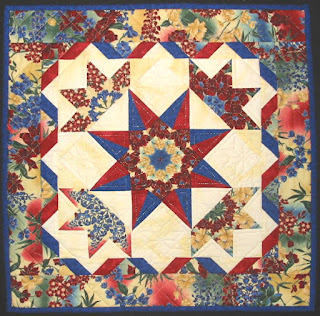 After having many quilts featured in the magazine, I was contacted by the editors to write a feature article about my miniatures. It appeared in the December/January 2004 issue. 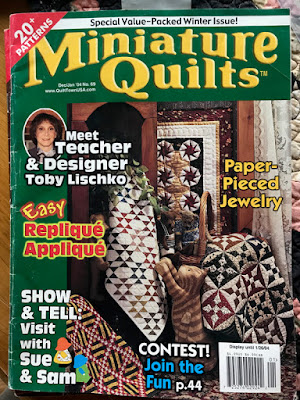 I also wrote an article for Quilter's World magazine which was featured in the August 2004 issue. 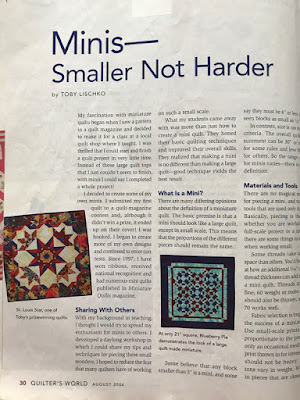 I designed this quilt specifically for that article called Singing the Blues. 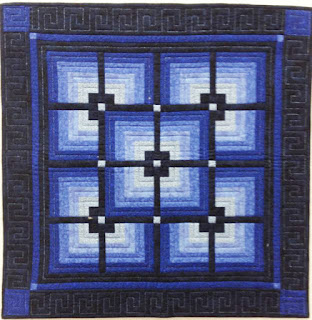 I then developed a lecture that I give for quilt guilds to show off all of the miniature quilts that I have made. It is a hands-on lecture. Since the quilts are small, they get passed around to the guild members to look at close up during the lecture. They really enjoy that.

One quilt, that I made from a group of fabrics I won in one of the contests, I entered into a local show and it won a first place ribbon in the miniature division. I think it won because I made the binding match each of the outside blocks in the quilt. This is a popular class that I teach. It is called Glorified Nine-Patch with a Twist. It is a 4" block and I carry templates on my website for them. Glorified Nine Patch. It is also used in a class that I teach on Craftsy called "Clever Curves" using the 6" size templates. This link will give you 33% off of the cost of any class on the Craftsy website (but it would be nice if you used it on my class)! Craftsy class special. It will apply the discount to your cart. Expiration Date: 03/31/2018
Details: Save 33% off the full retail price of any Craftsy class. Not valid for classes from our partner, The Great Courses. Limit one item per customer and cannot be combined with other coupons. Expires March 31, 2018 at 11:59PM Mountain Time. 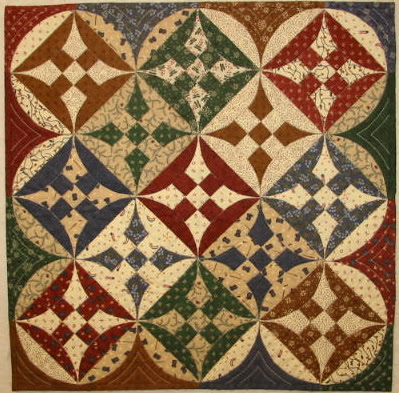 So now on to the Mini Love challenge. I went through a lot of different ideas to make for this challenge. I realized that I didn't have a whole lot of time to make a lot of little pieces so I decided to just make a small quilt (11" square) with half square triangles. The weather outside has been so dreary that I wanted to make something that reminded me of spring, so I originally picked out these fabrics. The one print had so many beautiful colors it reminded me of spring flowers. 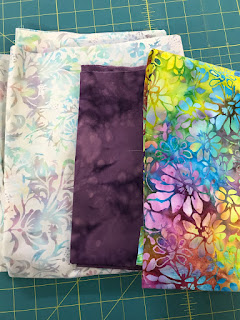 I pieced the half-square triangles (1-1/2" finished), cut out the rest of the pieces and laid them out and pieced them. 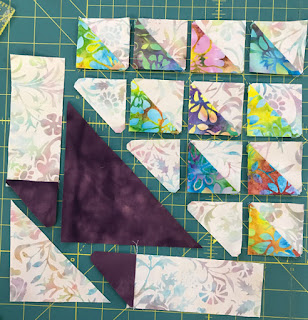 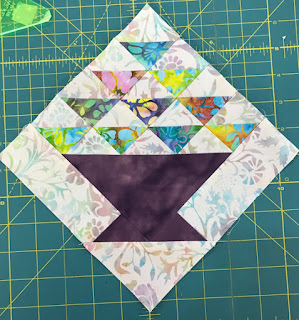 After finishing the block, I thought it just wasn't bright enough and there was not enough contrast between the background and the triangle patches so I picked out another group of fabrics. (I will finish this one later.) 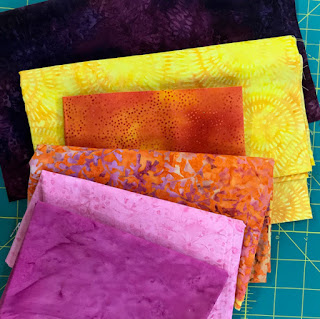 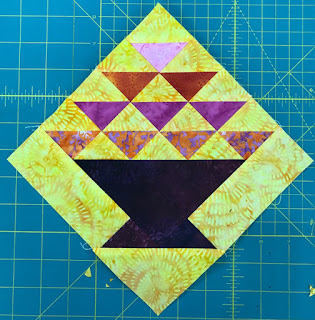 I liked this one much better and the yellow made me think of a bright sunlight. Since I had made two different blocks, I experimented with pressing the half-square triangle seams differently. The first one I press the seams to the side and the second one I press them open. I felt that the one that I press open laid a lot flatter. 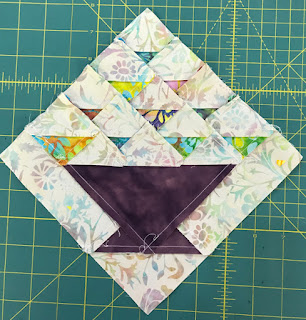 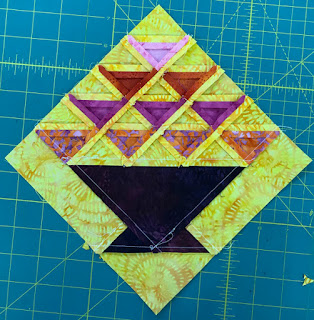 I added the outside triangles and borders and here is the finished quilt. I quilted in the ditch on my regular sewing machine and then put it on my longarm and quilted the rest of it. 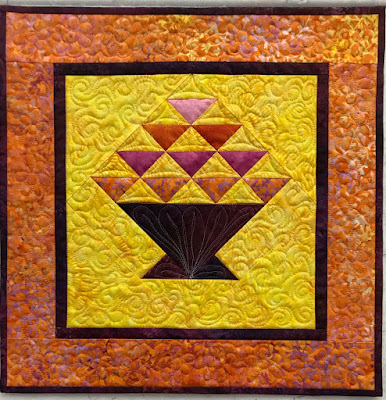 Let me give you a tip about binding miniature quilts. Because they are small, a double fold French binding can be a bit bulky. The best binding to use on miniatures is to cut strips that are 1-1/8" wide. You do not fold this binding in half. You sew only one edge to the quilt front, mitering the corners as you go. After attaching, you fold the outside edge of the binding towards the back of the quilt to touch the quilt top edge and then fold it again to the back and hand sew it down. It creates a perfect 1/4" binding. I used Aurifil thread for piecing and quilting and Hobbs Theramore batting.

I will be having another drawing with this blog. Leave a comment to be eligible to win some fat eighths from Island Batiks and my Cutting Corners template which I used to make most of the triangles in the quilt. The winner will be drawn on March 1. For US addresses only. Remember, I have no way of getting in touch with you if you don't leave me your email. So you either need to check back with my blog after March 1 or send me your email through the comment or using my contact form.

As always; Do what you love and love what you do. Thanks for reading and please share with your quilting friends.

You can follow other Island Batik Ambassador's blogs and see their projects.

What a great post, Toby! I have many old issues of Miniature Quilts and I have seen your work there. The yellow background is perfect for your basket - the piece just glows.

I have only made one mini quilt, but lots of table toppers. Thanks for the great giveaway. I like your blocks, and appreciate the tips on binding. cork@pa.rr.com

Lovely mini quilts! Upon reflecting about getting organized and the new year, I've decided to take a hiatus from making bed quilts. I'm tired of wrestling with them in my small space. This will be my year of smaller projects. Thank you so much for the tip on binding!
Kris Perez

Pretty mini basket. What are you going to do with the first basket? 24Tangent@gmail.com

Your miniatures are gorgeous! I like making minis for many reasons -- they don't take a lot of fabric, they are beautiful hanging on the wall, they can be finished in days rather than weeks (usually), and sometimes they are a fun challenge. Great tip about the binding!

These are so cool! I love the colors in the fabrics. Minis are fun because you can change them out to match the seasons -- or even your mood! Thanks for sharing. Susan.stitch(at)sbcglobal.net

Love your miniature quilt! Thanks for the information on the binding. I will have to remember that for when I make a miniature!

Sandy A
scotty4me39 (at) yahoo.com

Hi Toby, I completely agree with needing some bright colors at this point of the season. Your bright basket is just the right touch. I'll work up one of my own tomorrow! Vwoman87 at hotmail.com

Pretty mini quilts. I think I may have to try one. It'll have to get in line behind the others I need to make though.

HI JRQUILTS US ADDRESS IS AS FOLLOWS

thank- you for allowing to be part of the draw Judy

Thanks for the informative post. I have been trending towards smaller projects and this was great to see your process. akronne17@gmail.com

I was impressed. in Greece there is not yet trend miniature quilts...

So pretty! I'm a beginner so am still learning.

I like the yellow background best, too. Thank you for a very interesting post. I enjoyed reading about your past projects.
cecilialyoung at gmail dot com

I appreciate your informative tutorials. Thorough and inspiring. Your colors are lively - well done! The tip on single layer binding for small quilts is helpful, too. Keep up the good work! The quilting world is fortunate to have you, a talented teacher in it. Peggy True

We followers are always in for a treat with Toby's complete tutorials and beautifully colored samples. I appreciate the tip on binding for the mini quilts, and enjoy the State Block Challenge.

Thanks for the information on binding mini quilts. Your mini looks bright and warm, just the thing to chase away the winter blues. Lovely.

I love those minis! The basket quilt is adorable and the Island Batiks are always great! Thanks for the chance to win!

I love that Pineapple SHerbet - wow so cool!!! mumbird3(at)gmail(dot)com

The minis are so pretty! Love the tips you provide. Thank you for the chance to win.

I love these. Thank you for the giveaway! couponcrazyinky at gmail dot com

I love mini quilts. Yours is wonderful.